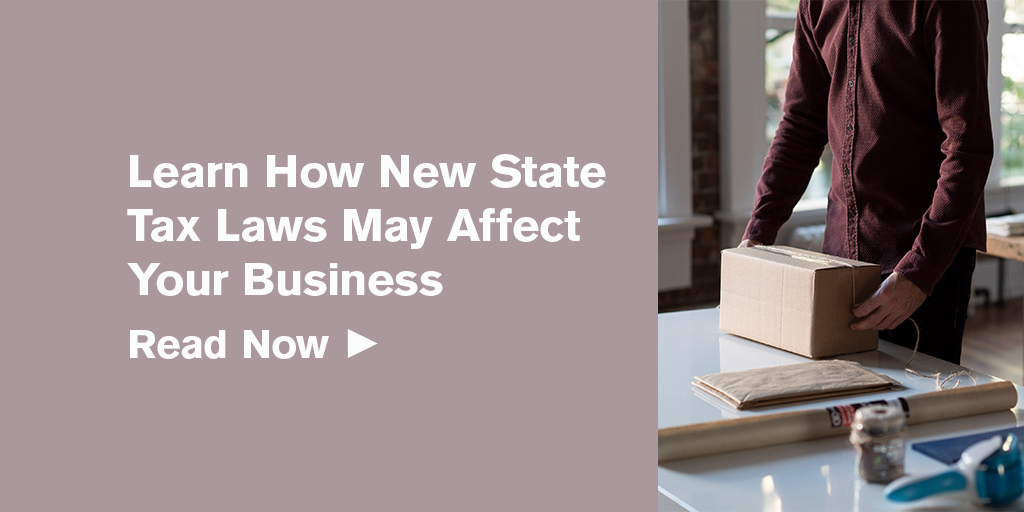 This article originally appeared on April 24, 2019 in Multichannel Merchant. To view the original article, click here.

Americans are used to hearing the refrain “we pay the sales tax” in today’s advertising campaigns, but in the wake of the United States Supreme Court’s ruling in South Dakota v. Wayfair (June 2018), the phrase “you pay the sales tax,” may be what many small business sellers will hear instead in future audits of their business operations.

That is because the Wayfair decision reversed the precedent set in the 1967 case, National Bellas Hess v. Illinois which subsequently was upheld in 1992’s case, Quill v. North Dakota. The Supreme Court in Quill ruled that states can only enforce sales tax collection laws on businesses that have a substantial physical presence in their state which generally meant having people or property in state at the time of the decision.

In Wayfair however, the Supreme Court ruled that having a substantial physical presence as the definitive minimum standard in today’s ecommerce world is unsound and incorrect. As a result, more than 35 states have added to the physical presence test a new, lower standard called economic nexus – a condition where state legislatures get to define their own minimum nexus thresholds which when exceeded imposes collection and remittance obligations on remote sellers.

Unfortunately, significant collateral damage in the form of tax collection burdens placed on e-commerce sellers may be the legacy of the Wayfair case. Many small and medium-sized ecommerce sellers run on thin margins and have little resources to ensure they are properly collecting sales tax on each order. Indeed, the Court’s rationale in the past preventing the collection of sales taxes on out-of-state sellers was an acknowledgment of the seriousness of the administrative burden to collect and remit sales/use taxes properly in all 46 states plus local jurisdictions.

The first thing business owners need to know about economic nexus is that you don’t need a lot of sales in a state to trigger taxable nexus, which will in turn create a collection and filing obligation in a state. In many economic nexus states, the physical presence standard remains, but now it is compounded with an economic nexus rule where the popular thresholds of $100,000 in sales, or 200 or more transactions with customers in the state during the current or previous calendar year means sellers must collect sales tax on all future transactions with customers in that state. Some states, however, are establishing higher thresholds to insulate more small sellers from the collection and remittance burdens. For example, California’s new legislation on the Governor’s desk for signing, establishes a $500,000, sales only, threshold.

The biggest impact of the Wayfair decision is the calling for today’s on-line sellers to address immediately sales/use tax issues created by economic nexus thresholds as the effective dates for many of these thresholds have already passed. Reasoned analysis and decisions are needed now without delay. The proper decision, however, is not always to give in and register in all states. A proper answer can vary from not doing anything at the moment, to registering in all sales/use jurisdictions as soon as possible, or something in between. No matter the final decision, on-line sellers should be resigned to devoting in-house resources or hiring outside consultants to address the impact of the Wayfair decision thoroughly and timely.

Many sellers also may not fully realize that their future audit assessments may have to come out of operating funds of the business. Either the buyer pays the tax at the time of sale where allowed or the on-line seller likely has to pay the tax at the conclusion of an audit, which may take place up to three years later when the original purchaser is nowhere to be found to collect the tax due.

With economic nexus becoming a sales/use tax focal point since the Wayfair decision, online sellers should not overlook new Marketplace Facilitator laws that shift the collection obligations from the remote sellers to third-parties running the virtual ecommerce marketplace. Amazon and eBay are popular marketplace facilitators and both have started collecting and remitting sales/use tax on some states’ transactions executed in their marketplaces by on-line sellers. Businesses may have to segregate their direct on-line sales so they can properly collect and remit applicable sales and use taxes on these sales while the marketplace facilitator collects and remits the tax on the marketplace sales.

Additionally, states may make inquiries of new businesses registering for sales/use taxes purposes to determine if the new businesses’ also have an income or excise tax filing obligation. Businesses need to fully understand the questions they are being asked and how they answer so they do not inadvertently agree to file income tax returns when they are not obligated to do so. Even though Wayfair is a sales/use tax case, states are also closely examining and applying the Supreme Court’s analysis to create new interpretations of their laws that will increase income tax or excise tax payments or other tax revenue streams in the state.

So much remains to be seen in the near future for the post-Wayfair sale tax world, but one thing is certain, on-line sellers should educate themselves of all of the possible scenarios so they can decide what actions to take and when they should be taken. What used to be a relatively easy decision to make in the past is now anything but.


John serves as a Managing Director of Tax at BPM, with nearly 30 years of public accounting and private industry experience in State and Local Taxes (SALT). John helps…