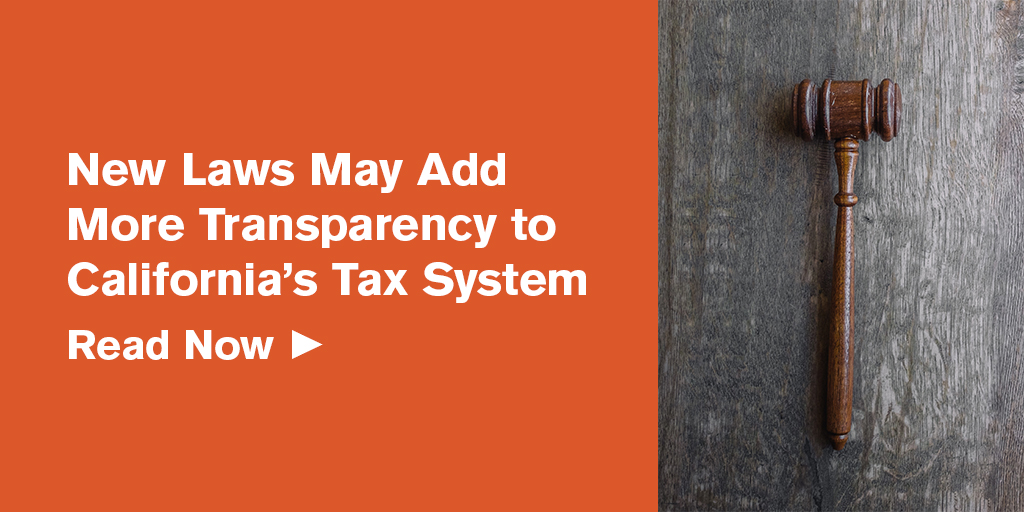 Law360 (March 20, 2020, 2:56 PM EDT) — Two years after the massive reorganization of California’s tax system, which created the independent Office of Tax Appeals, there is cautious optimism that the overhaul, called the Taxpayer Transparency and Fairness Act, is living up to its name.

Much of the optimism is due to one of the reorganization’s centerpiece moves — transferring the hearing of appeals from the elected Board of Equalization to the OTA, an administrative tribunal with 27 judges. The OTA was established with the goal that tax disputes would be decided on the facts by administrative law judges, rather than under the previous system, which allowed for the lobbying of board members.

Under the prior system, it was possible for parties in BOE appeals to have been constituents of the elected board members, and they could meet with those board members to lobby them in advance of hearings. The appearance of potential impropriety was made worse by the fact the BOE was not required to publish written opinions, resulting in a system that led to decades of complaints of favoritism.

The BOE’s appeals practice is gone now, and even the Council on State Taxation, which represents large corporate taxpayers and has been often critical of California’s tax administration, has given the OTA a nod in its most recent tax agency administrative scorecard. There it said California had earned the designation “most improved,” going from a C-minus to a B-minus, mostly attributable to the creation of the OTA.

The TTFA legislation, signed in 2017 by Democratic Gov. Jerry Brown and enacted after a Department of Finance audit of the BOE found mismanagement that included nepotism and misallocation of funds, has proved to be a good idea, said Tim Gustafson of Eversheds Sutherland, a longtime California practitioner.

“Why the restructuring took place. … was to largely divorce the appellate function, for administrative tax appeals, from the political,” Gustafson said. “And in that way, I think that both the state and the taxpayer community feel that there has been a positive change. They wanted to set up a truly independent administrative agency, and I think that has been another positive change.”

In signing the TTFA legislation, Brown, thoroughly exasperated after the Department of Finance audit, succeeded where at least two other governors who had hoped to shake up the tax administration had failed. The BOE, more than 140 years old, had come under criticism in some circles in California for decades, but the Department of Finance audit gave Brown and the state Legislature the data to finally put the hammer down.

At the time of the signing, which in addition to creating the OTA shifted the BOE’s sales tax administration responsibilities to another new tax agency, the California Department of Tax and Fee Administration, many practitioners were glad to see that something was finally being done. Beyond that, though, they were not sure what to think. They were skeptical about many unknowns, including that a system that had been in place for decades was upended.

Meanwhile, California — already unusual in that it had two tax agencies, the BOE and the Franchise Tax Board — now had four. And the once-powerful BOE, which both heard appeals and oversaw administration of the sales and use tax, would now be responsible only for overseeing property taxes as well as minor tax types, such as the alcoholic beverage tax.

In addition to concern about that complexity, practitioners wondered whether the OTA would deliver what was promised. They were worried that in the early stages, at least, many of the administrative law judges assigned to the OTA came from the BOE and the Franchise Tax Board, recalled Carley Roberts of Pillsbury Winthrop Shaw Pittman LLP.

“So many of them were FTB and BOE attorneys,” Roberts said. “The question mark was: Would we get that objective judging that is needed in an independent tribunal?”

But given the OTA’s work to date, so far, so good, Roberts said.

“They’ve taken on both the CDTFA and the FTB," she said. "They’ve taken them to task. They are not afraid to rule against the agencies."

Practitioners also give the OTA credit for outreach. Roberts is among those representing practitioners on an advisory committee for the OTA, which also includes representatives from the state government, other tax agencies and taxpayer advocate groups. Shail Shah of Reed Smith LLP, who is also on the committee, said the OTA has greatly expanded tax transparency, and solicits input from the board on how it can best serve taxpayers in every step of the appeals process, from case intake to determining when a decision should be precedential.

Meanwhile, committee member Ben Lee of the California Taxpayers Association, which was opposed to the TTFA legislation, said it is too early to make a full determination about the OTA. Still, he gave its judges credit for impartiality and said his group is committed to the agency’s success.

Beyond that, the OTA handles appeals in ways that are plainly different from the BOE’s practice. First, the OTA reviews each case that comes before it, whereas the BOE had a consent calendar and placed some cases there to be approved without review.

Second, the OTA has judges, whereas the BOE had elected members who were not judges. Thus, there no longer is ex parte communication between the parties and the people who will decide the case. In addition, unlike BOE’s elected board members, the OTA judges are required to have experience in tax law, and some have 20 years or more, according to the biographies on the OTA’s web page.

Third, under the OTA, all opinions are published.

“You are always going to see the thought process, the consideration of the legal argument on both sides,” said Kristen Kane, chief counsel for the OTA. “There’s no hiding behind a nonpublished opinion. That provides a lot of guidance for people.”

The BOE, Kane said, was required to publish opinions only in which at least a half million dollars was at stake. And even when such opinions were issued, they were sometimes only one paragraph long, she said.

“In our cases, no matter how large or how small, the taxpayers get the same level of care and consistency throughout the process,” Kane said. “They get the same thorough opinion.”

And numbers provided to Law360 by Betty Yee — controller of California, chairwoman of the Franchise Tax Board and one of five members of the BOE — illustrate differences between the OTA and the BOE when it comes to published opinions.

“You just see the volume is so much greater” between what the OTA has published and what the BOE published, Yee told Law360.

“This is the guidance we’ve been waiting to see,” Yee said.

Law360 contacted each member of the BOE seeking response to this story. Two did not respond, but two who did had opinions sharply different from that of their colleague Yee. Both BOE members Antonio Vazquez and Malia M. Cohen said the BOE would be the better agency for handling taxpayer appeals. Each joined the board in 2018, and so were not part of the BOE when Brown stripped it of many of its duties.

Vazquez and Cohen each told Law360 that taxpayers would be better served by an elected official who is in office to respond to constituent needs.

“We are doing a disservice to the taxpayer,” Vazquez said. “You are [now] dealing with a bureaucrat that really has no interest in hearing you out as a taxpayer. It’s not like that person is voted in to represent you.”

"Regarding the right venue [for appeals], elected officials, who are accountable directly to the public, and not to a government bureaucracy, provide the fairest and most impartial review of taxpayers' appeals,” Cohen said.

Still, tax professionals contacted by Law360 thought former Gov. Brown had the right idea with the creation of the OTA.

“It was still a good decision to segregate [tax appeals] and get away from the old process,” said John Hayashi, a managing director of tax at BPM. “I haven’t heard anybody say, ‘Oh, what a mistake.’”